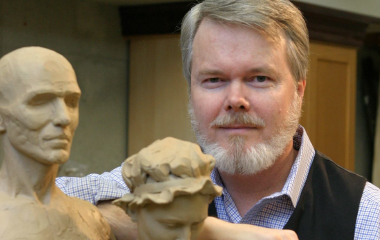 “Carpenter’s work emerges from the beaux-arts modeling of the late 19th century, but it clearly owes something to Rodin in its dramatic shaping and forming of postures. Yet, it has a different kind of tentativeness born of the 20th century— this yearning to go beyond.  Jay’s work contains a ‘religious inwardness.’ It avoids nostalgia and sentimentality. It’s as though the figures are struggling to go beyond their own skins. They have beauty, but they know their own transience, their transformation into the next phase of their lives.”

—Msgr. Stephen Happel
Dean of the School of Religious Studies
The Catholic University of America

A professional sculptor since 1976, Jay Hall Carpenter earned his reputation during 20 years as sculptor for the Washington National Cathedral. He created the original carver’s models for over 500 sculptures that adorn the gothic, limestone building. These sculptures include saints, angels, grotesques, and gargoyles. Many American churches have commissioned his work, as have the State Department, the Smithsonian, Canterbury Cathedral, and the New England Medical Center. Other clients include, the University of Missouri at St Louis, and the State of Maryland.

Carpenter was elected into the National Sculpture Society before the age of thirty and has received multiple national awards for his sculptures. Carpenter has also won numerous sculpture design competitions, including those to create an eight-foot bronze of Maryland State Comptroller Louis Goldstein for the State Capitol, and a life-size bronze and granite sculpture of Jim Henson and Kermit the Frog for the University of Maryland, where Henson was a student in the 1950’s.

George Lucas selected Carpenter to create the sculptural centerpiece for a new film school at the University of Southern California. This heroic bronze of Douglas Fairbanks, Sr. stands atop a decorative fountain in the entry courtyard. 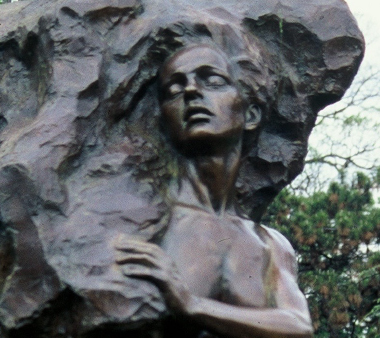 Carpenter’s careful management of his career, balancing classroom study at the Pratt Institute with hands-on training at the Washington Cathedral, has placed him squarely in the tradition of America’s finest public sculptors.

I found myself gleefully anticipating those (portrait) sessions. The combination of watching Jay at work and seeing that incomparable view of the Cathedral was like a battery for me.

From angels and gargoyles to the massive Greek men and idyllically beautiful, youthful Narcissus, captured perfectly in that serene moment when he becomes mesmerized by his own reflection, on to the modern interpretation of the duality of personality, Carpenter's repertoire of ideas, images, and metaphors seems limitless.