Darth Vader and Other Stars

As Star Wars is back in the American conscience, I will relate my brief encounter with greatness, Darth Vader.

I had the great honor and pleasure of sculpting for the National Cathedral from 1976 through 1996 and became the Cathedral’s first Artist-in-Residence. I designed in clay all of the 400 or so grotesques and gargoyles, angels and other decorations on the West Towers. 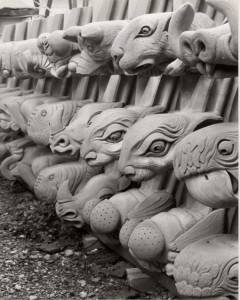 In the 1980s, while its west towers were under construction, the Cathedral held a decorative sculpture competition for children. Word of the competition was spread nationwide through National Geographic World Magazine. The third-place winner was Christopher Rader of Kearney, Nebraska, with his drawing of Darth Vader.

The iconic helmet was sculpted by me using the drawing submitted and photographic stills from the movies.  It was carved in limestone by Patrick J. Plunkett, and placed high upon the northwest tower of the Cathedral along with the other winning designs: a raccoon, a girl with pigtails and braces, and a man with large teeth and an umbrella. 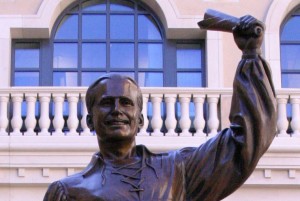 Many years later, I was asked to sculpt a large statue of Douglass Fairbanks, Sr. for a fountain at the University of Southern California’s film school. The sculpture was commissioned by George Lucas. As we went over the Fairbanks design at ILM, Lucas’s San Francisco headquarters, I asked him if he was aware of the Vader grotesque, and he said he wasn’t.  The Vader sculpture appears as a clue in Dan Brown’s book The Lost Symbol, and is one of the most popular (and hardest to find) sculptures at the Cathedral. 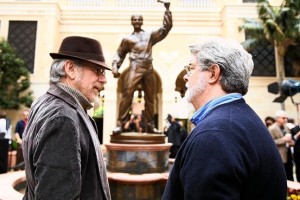